Our sun is not only the most important source of energy for us humans but also a decisive factor in the quality assessment of components and products in terms of lightfastness.

Almost all products are exposed to the sun's rays during their lifetime and have to withstand them. Artificial light in department stores, for example, also has an effect on a product and can change its appearance over time. 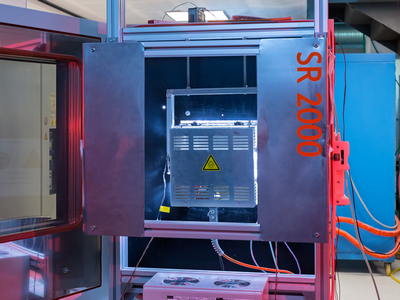 Explanation of the solar simulation(click to open)

An important area for solar simulation is the automotive industry. Cars and trucks are sometimes exposed to intense sunlight over their entire service life. The effects are sometimes serious and affect both exterior and interior vehicle components. Paint bleaches out, dashboards discolor and can crack.


While UV light ages plastics even at low temperatures, thermal exposure accelerates the aging process due to the influence of temperature. UV light in combination with water leads once again to accelerated aging, which is why this is also referred to as weathering testing.

The generation of the light is made with different emitters:

These tests are intended to investigate the effects of weather-related factors such as sunlight, temperature, humidity/water, etc. on materials and surfaces. A fundamental distinction must be made between natural weathering (outdoor weathering) and artificial weathering (laboratory weathering). Both are carried out by TechnoLab.

For outdoor weathering, the objects to be tested are exposed to local environmental conditions at specific locations with special climatic peculiarities under measurement observation. This procedure requires a considerable amount of time, especially since meteorological imponderables can influence the course of the test.

In contrast, laboratory weathering has clear advantages. The influencing factors (irradiance, temperature, humidity, etc.) can be kept constant over the entire observation period. Thus, results can be obtained in a relatively short time, allowing reliable statements to be made about "weather fastness", "weathering stability" and "light fastness".

The influence of ultraviolet radiation (UV radiation), especially short-wave radiation, on certain materials can hardly be overestimated; their optical and mechanical properties can change significantly. Organic materials and plastics in particular undergo sometimes significant aging processes (yellowing, discoloration, embrittlement, decay) under UV light in the sun's rays. Deterioration of natural and synthetic elastomers and polymers due to photochemical reactions.

The infrared portion of the radiation can also have significant consequences such as: Jamming or detachment of moving parts, weakening of solder joints, loss of calibration, premature actuation of electrical contacts, fading of colors of color-coded components, changes in the properties of elastomers and polymers, blistering and peeling of paints and other surfaces, softening of potting compounds, and many others.

Components made of plastics such as acrylic glass, PVC, polyethylene and EPDM are tested in the laboratories, with both mechanical (hardness, elasticity and strength) and optical properties (turbidity, discoloration, gloss) being examined. The UV simulation facilities cover a wide range of radiation intensity combined with different climatic stresses.

Among other things, the following is used to perform these tests:

For the realization of artificial weathering or irradiation carried out with UV fluorescent lamps, different lamps are used according to DIN EN ISO 4892-3, which have different radiation characteristics. Procedure A describes weathering with UVA-340 lamps (type 1A) and procedure B describes global radiation behind window glass with UVA-351 lamps (type 1B). With both lamps, a very good match with the radiation characteristics of sunlight is achieved. The UVB-313 lamps, on the other hand, also emit in the mid and far UV range and thus below the solar cut-off wavelength of 295 nm. These lamps are used in particular for aviation and aerospace investigations.